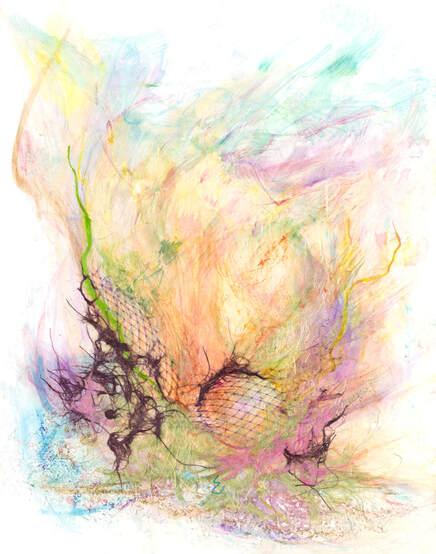 ​​
​​My artwork is about the mysteries of movement. My process is to let the textures and colors of my materials engage in conversations. I layer paint, netting, filaments, torn paper and cut digital drawings until a kinetic harmony is reached.

I am a native Californian now based in Washington, D.C. My art work has been strongly influenced by my years in Hawaii, Japan, and on the West Coast. My earliest pieces were paintings and drawings inspired by volcanoes and flamenco dancers. When I moved to Japan in the late 1990s, I discovered fibrous washi paper. Its filaments pressed into transparent sheets of colored paper became the driving force of my art practice.

Upon moving back to the United States I discovered the dyed netting used to package produce. That texture became an additional inspiration for my abstract mixed media artwork. Next I began making digital drawings with netting lines and wave patterns to create a tactile sense of motion in a 21st century medium.

I continue to listen to the communication within and between my materials. Currently I re-purpose my own images and torn paper into collages or I apply a second app onto my digital drawings creating new kinetic conversations from old.   ​